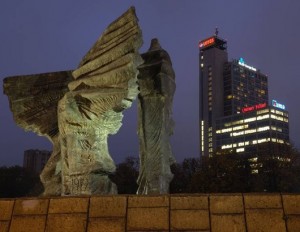 Recently, the highest building in the Southern Poland has celebrated its 5th anniversary. Altus was officially opened on 14th of September, 2004. Since the beginning it was managed as a mixed-use complex. Localised at 13 Uniwersytecka Street in Katowice and covered the total area of 69 000 sq. m is the seat of a cinema, a hotel, a fitness club as well as a shopping center and many companies. The 125 high structure is constructed of three cuboids – a 4-storey atrium as a base of the building and another two parts of 18 and 29 storeys high. A 3-storey underground car park is designed for 560 vehicles which can be serviced by an in place car-wash.

The four-storey atrium includes shops, boutiques and restaurants. There is also located the Helios nine-screen cinema, the Gymnasion fitness club and a 600 sq. m conference area. The second, middle part between 5th and 18th storey is an A-class office space covering area of 13 231 sq. m. The third highest part is occupied by the four-star Qubus Hotel Prestige with 150 rooms. The Sky Bar and luxury suites were located on the top floor.

Altus as a modern facility holds the Building Management System (BMS), structural computer and telecommunication networks, a 24-hour CCTV camera monitoring system, 18 lifts and 6 escalators. Altus also has an automatic incident reporting system which instantly informs the fire brigade and tenants in the building – by means of numerous loud speakers – about the fire.

Knight Frank is responsible for the property management.