Cushman & Wakefield released the „Marketbeat Poland – Autumn 2013” report presenting an overview of the Polish office, retail and industrial markets in the first half of 2013 and an outlook for the nearest future. The analysis also includes Katowice.

Office market
Leasing volume in Katowice’s office market reached 27 500 sq. meters in H1 2013, with pre-lets accounting for 51% of the total. The largest deals involved owner occupation of space. Polski Koks took up over 6 150 sq. meters in the office building on Paderewskiego St., while the companies from group Getin Bank and LC Corp signed a lease for 6 000 sq. meters in the phase one of the LC Corp project on Roździeńskiego Av. At the end of Q2 2013, Katowice’s office stock exceeded 300 000 sq. meters, largely following the completion the Polski Koks’ head office (6 150 sq. meters). Under construction are the passive office building (6 335 sq. meters) developed within the Euro-Centrum’s Science and Technology Park, the Echo Investment’s first stage of A4 Business Park (9 000 sq. meters) and the first two phases of Skanska’s Silesia Business Park totalling more than 20 000 sq. meters. The vacancy rate in Katowice was up by over 1,5 percentage points to 8,3% from the rate at the end of 2012. Asking rents stood at EUR 13–14/sq. m/month in Q2 2013, with effective rents at EUR 11–12/sq. m/month. 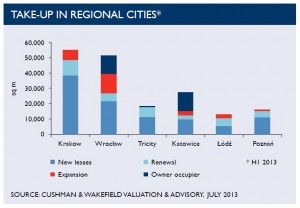 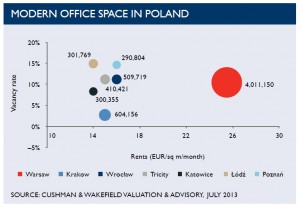 Retail market
There are 42 existing shopping centers in the Katowice agglomeration and another two being under construction, according to Cushman & Wakefield. The shopping center density in the eight biggest Polish conurbations is the lowest in Katowice and Szczecin. At the end of June 2013, the Katowice agglomeration posted the vacancy rate at the level of 3,4%. Prime rents in the agglomeration’s shopping centers remain the highest after Warsaw, while prime rents of main streets are the third highest after Warsaw and Kraków. The delivery of Galeria Katowicka is one of the four biggest openings expected to come onto the market in Q3 and Q4 of 2013. When completed, the refurbished 3 Maja Street, together with newly opened Galeria Katowicka, will become a prime retail location in Katowice. 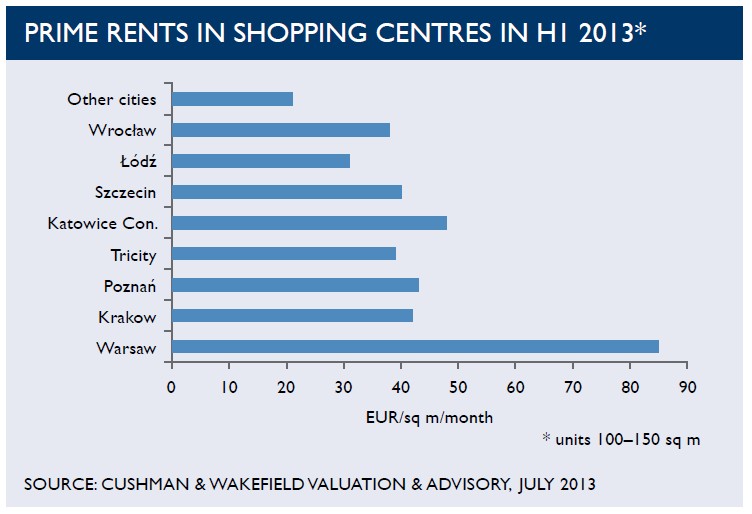 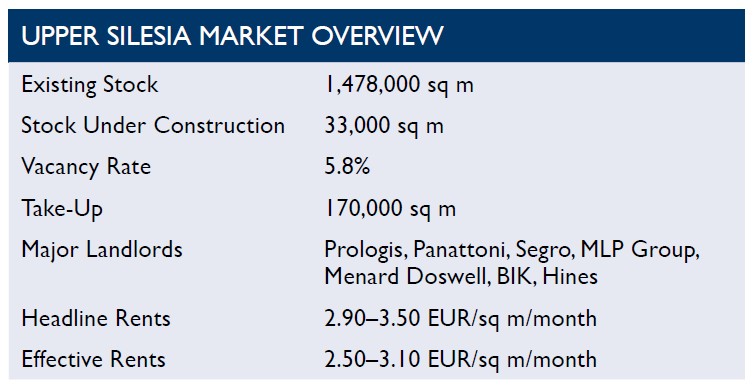