Neinver and PKP S.A. launch the final stage of preparatory works connected with the redevelopment of the Railway Station and Szewczyka Sq. Since next Monday, 25th of October, the Station’s building will be closed for passengers. There will be only a temporary passage-way in the main hall connecting Szewczyka Sq. with the platforms and temporary station.

The passage-way will operate until the final closing of Szewczyka Sq. According to Łukasz Kurpiewski, press spokesman of PKP, it will most likely take place by the end of November 2011. From then on, the Railway Station’s building and Szewczyka Sq. will be entirely out of service and construction works should start at full steam.

To provide an uninterrupted passengers’ service during the redevelopment, the temporary stations at Oddziałów Młodzieży Powstańczej Sq. and on Konopnickiej Street were opened. At the same time construction works on the platform number one were started by PKP PLK and will be concluded in December this year. Works on the refurbishment of following platforms are planned to be kicked off next year.

By the end of 2012 Neinver is going to develop the Galeria Katowicka shopping center with an underground car park at Szewczyka Sq. The present building of the Railway Station will be tore down and redeveloped. An underground public transportation hub will be raised under the new Railway Station. The new building is scheduled for opening in May 2012.

Leaflets showing location plan in the area of construction site are distributing in the Railway Station: 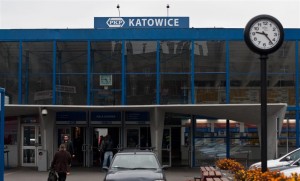 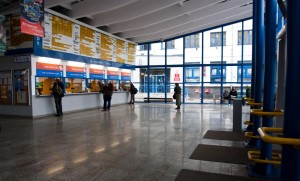