Representatives of the Silesian Museum and the prime contractor – a consortium of Budimex S.A. and Ferrovial Agroman S.A. – signed today a contract for construction work on the Museum’s new seat. A positive decision on the project’s application and EU funds admission had made by the European Commission on 25th of May 2011, enabled to start the project.

“The project is a great challenge because no one has ever built such a building in Poland before. However, the company is well prepared, we are going to enter the construction site within next days and bring in our equipment this month. A groundbreaking ceremony is planned for 5th of July” – said Andrzej Goławski.

A value of the contract signed with the prime contractor exceeds PLN 207 million. The construction work on the building will take approximately 20 months and will be concluded in February 2013. Then the art collection has to be moved to the new seat thus the grand opening of the new Silesian Museum is scheduled for July 2013.

The building, mostly located under the ground, will deliver more than six thousand sq. meters of exhibition space and an underground car park for 232 vehicles. Thanks to an on-line camera located on the “Warsaw” mine shaft, the construction work’s progress can be seen from any place around the globe. A direct link to the camera will be available at www.muzeumslaskie.pl.

The new seat of Silesian Museum will be financed within the framework of the Regional Operational Programme of the Silesian Voivodeship for the years 2007 – 2013. A total budget of the project is estimated at PLN 324 million. 85% of the qualified costs will be financed by the European Union funds. The Riegler Riewe Architekten studio from Graz is responsible for the architectural design. 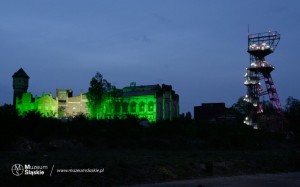