After three months of a construction work on “Dom w Dolinie Trzech Stawów”, the Hochtief prime contractor of the investment finished a foundation of the first stage. The two buildings are based on 645 foundation piers made of 11 thousand tons of concrete. A total length of the piers exceeds 5 kilometers.

The cornerstone laying ceremony for the housing estate took place in July. In the middle of October, Hochtief finished the most difficult part of the works – construction of the foundation and the underground car park’s slab. “Henceforward, the buildings will be climbing up” – said Michał Skwarek, sales and marketing manager at Okam Capital, an investor of the development.

According to the prime contractor, all ground works have been already concluded. More than 5 000 cubic meters of concrete were laid to build the foundation – the volume of the used concrete is comparable to the capacity of two Olympic swimming pools that measure 25 meters wide and 50 meters long.

“Dom w Dolinie Trzech Stawów” (House in the Three Ponds Valley) is being built at 47 Sikorskiego St. The first stage – the two buildings, 8- and 9-storeyed plus one underground level as a car park – will consist of 108 apartments. The two facilities will be delivered in the third quarter of 2014.

The developer has prepared two sales promotions. Currently, the price per one square meter is PLN 5 999, the same for all apartments. The second offer is 10/90 – 10% of the apartment’s total price is paid when the contract is signed, the remaining 90% will be paid after the delivery of the buildings. 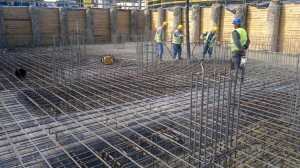 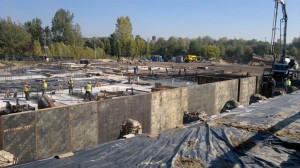