Budus S.A., a prime contractor of the passive building of the Euro-Centrum’s Science and Technology Park, is currently progressing with ground works. The investment was launched in August this year. Previously, in April, the company of Skanska had started a renovation of a two-storey building designed for the Solar Systems Test Center. Recently, a raw state of the building was concluded and fit-out works commenced.

A construction crew of Budus prepares an excavation for a foundation of the passive building. Now, in view of a working coal mine situated close upon the area of the Park and a possible influence of mining damage, it is necessary to stabilize the future building’s foundation. Thereby, a technology of pile foundation is used. The building will cover 6 335 sq. meters destined mostly for office and administration purposes. 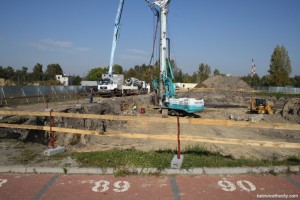 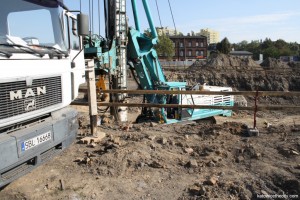 Meanwhile, on the other side of the Park, Skanska is finishing the renovation of the Solar Systems Test Center to be used by producers of heat pumps, solar collectors, ventilation systems and solid fuel boilers. The 738 sq. meters facility will also house nine-meter-high rooms for testing bulky machinery, laboratories of solar systems and collectors to harness the sun’s energy and to test it – so called “an artificial sun”. “The building will be provided with a modern test equipment delivered by PSE AG company from Freiburg, Germany. It is one of the leading centers developing solar technologies which cooperates with Fraunhofer Institute for Solar Energy Systems, the largest solar energy research institute in Europe” – said Alina Szastok, PR Specialist at Euro-Centrum.

The Training Center of Modern Heating Technology is being developed right alongside. Training courses for workers of companies operating in the area of solar systems and low-power biolers will be taking place in the facility.

All the investments are worth PLN 97 million and are partially financed from the European Regional Development Fund and from the state budget.