Silesia Business Park (SBP), an office complex planned along Chorzowska St. opposite Silesia City Center, was proposed by Skanska Property Poland in 2007. In the meanwhile, the project prepared by Medusa Group has been changed and the developer has obtained all necessary administrative permission including a building permit. However, the undertaking has not been kicked-off so far.

Additionally, the offer of SBP’s office spaces for rent is not shown at the official Polish website of Skanska since several weeks. Does it mean the company cancelled the project? Does Skanska still hold the building permit valid? According to the developer’s representative, it seems the situation is the same as it was in the previous years.

„We have the building permit for the Silesia Business Park office complex. A construction work on the first office building will be started as soon as the first pre-lease agreement is signed” – says Anna Wiśniewska, marketing coordinator of Skanska Property Poland. “The offer of the project is temporarily unavailable at the company’s website as it is currently under renewal construction what is connected with a large number of planned investments in several Polish cities. The offer of SBP will appear back again among other Skanska’s investments when the website’s renewal is finished” – Wiśniewska explains.

The first building can be occupied after 19 months from signing the pre-lease agreement.

The project of Silesia Business Park was redesigned in 2010 and included a new shape of the elevation and implementation of “green” solutions in accordance with LEED standards.

If erected, the investment will consist of four 12-storey office buildings. It will comprise approximately 46 000 sq. meters of leasable space in total, 11 500 sq. meters in one building. The Park is designed to bring energy savings, including heating, ventilation and lighting of the office space. 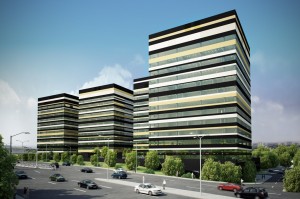 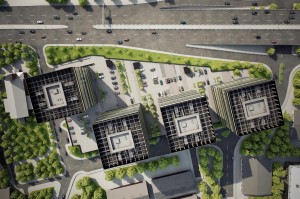