Layar works by using a combination of the mobile phone’s camera, compass and GPS data to identify the user’s location and field of view, retrieve data based on those geographical coordinates, and overlay that data over the camera view. While looking through the phone’s camera lens, a user can see restaurants, popular bars and shops, museums, hotels and other places so called Points of Interest.

To use the application, the mobile phone needs an Internet connection, camera, GPS and compass. At this moment it supports all Android devices and the iPhone 3GS. A Symbian version is in development.

Layar for Katowice was developed by MBT Media for the Department of Promotion of the City Hall and at present consists about 50 Point of Interests located mostly in the City Center. The city guide was prepared in two language versions of Polish and English. It includes four categories: culture & entertainment, public service & transport, hotels and events.

Installation of Layar for iPhone 3GS and Android device 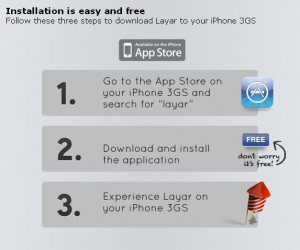 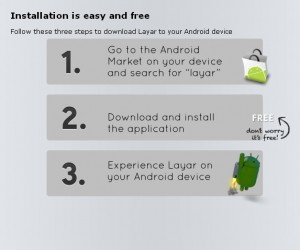 It works as follows: starting up the Layar application automatically activates the camera. The embedded GPS automatically knows the location of the phone and the compass determines in which direction the phone is facing. Each partner provides a set of location coordinates with relevant information which forms a digital layer. By tapping the side of the screen the user easily switches between layers. This makes Layar a new type of browser which combines digital and reality.

Layar is developed by SPRXmobile, a mobile innovation company. The first country which launched Layar was the Netherlands.

KISS
The City Hall of Katowice also presented today an SMS Information Service of Katowice (KISS) for mobile phones. This solution enables registered users to get an up-to-date information about the City via SMS text messages. It will include information of three areas: City Hall, society and events. The application works only in Polish. Go to www.sms.katowice.eu to sign up. The service is free of charge.