Galeria Katowicka and the Mixed-use Transport and Retail Center won “Construction of the Year” Award conferred by the Polish Association of Construction Engineers and Technicians. The official award ceremony was held at the House of Technology office in Warsaw.

This prestigious event is aimed at selecting most spectacular achievements of the Polish construction industry. Projects from the whole country are assessed at three stages, based on design and construction documentation. Shortlisted investments are visited by the jury made up of experienced engineers.

“Award-winners boast modern technological solutions, top quality, efficient organization of the construction process and an impressive level of occupational health and safety, and environmental protection” – reads the explanation published by the Polish Association of Construction Engineers and Technicians. The jury granted the “Construction of the Year” Award for successful completion of all elements of the complex – the mall, railway station, underground bus terminal, underground road, parking lot and movie theater.

23 months of works were marked with numerous challenges, the biggest of which was to develop nearly 1 km of 30 m deep diaphragm walls around the shopping center. Another difficult task was to recreate the 1970s umbrella pillars functioning as the roof over the railway station and part of the mall.

Over 100 000 cubic meters of concrete mix and 11 000 of rebar were used. There are 750 km of electrical wires. More than 1 200 people were working at the construction site at peak moments.

The award was accepted by Neinver (the investor and developer) and Strabag (the prime contractor).

Galeria Katowicka, the new railway station and the underground bus terminal have formed one of Poland’s most modern mixed-use transport and retail centers. The investment also involved developing an underground section of Dworcowa St. which connects two parts of the City. The complex can be easily reached with nearly all means of transport: suburban rail, long-distance domestic and international trains, buses, trams, cars and bicycles. It offers a parking lot with 1 200 spaces. 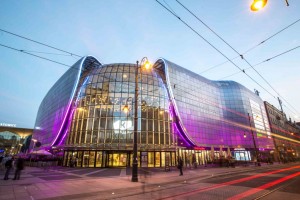 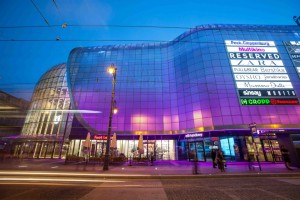