Construction works on the new part of Silesia City Center began six months ago and are to passed the halfway mark. It is planned to finish the new building in 13 months.

At present, a fourth stage of works is in progress. This stage will be finished in spring. A celling of an underground car park for more than 500 vehicles is going to be concluded by the end of march. At the same time, construction crews works on a celling of the “0” level. This ceiling was designed as an additional car park on the “+1” level. Access to the parking places on the roof will be possible thanks to two ramps.

Four tower cranes and more than 300 builders work currently at the construction site.

„We spent last two months to conduct ground works, build foundations and the underground car park. At one time, we had to run works along an elevation of the existing building and execute some demolition works” – said Artur Kotas, representative of DIL Polska Baumanagement responsible for the project management. “A progress in construction works is going to be visible every day. The next fifth stage will be connected with finishing a raw state of the building and will be concluded mid-May this year. The last sixth stage will begin in June and includes a building completion, fit-out works in the interiors as well as renewal of parking spaces and greenery in the area” – Artur Kotas added.

A worth of the extension exceeds EUR 50 million. 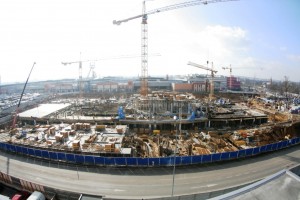 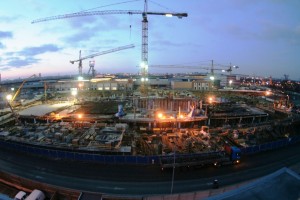