Jones Lang LaSalle (JLL) summarized the office market data across main cities in Poland after Q3 2012. According to analysts, Katowice together with Kraków and Wrocław were leading in occupier activity among regional Polish cities in the third quarter of 2012.

Occupiers’ sentiment in Katowice remains quite stable with some significant transactions signed so far this year including a 5 400 sq. meters deal by Unilever in Nowe Katowickie Centrum Biznesu.

Q3 2012 brought only one completion of new office space to the market – the Upper Silesian Industrial Park delivered the first building of GPP Business Park (7 800 sq. meters). Quarterly vacancy rate grew by 1,1%, from 9,9% in the second quarter to 11% in the third quarter of 2012. The total number of modern office space in the City reached the level of 276 800 sq. meters.

JLL’s report says that 53 850 sq. meters of office space were under active construction in Katowice in Q3. However, it has to be mentioned that the presence of two office schemes listed by JLL – Neinver building and Francuska Business Park A – is questionable. Works on the first one are suspended (the investor waits to secure pre-lease agreements), development of the second one has not yet been started. “We are going to select a prime contractor for the building in the weeks to come” – says Wojciech Gepner, public relations manager at Echo Investment, an investor of Francuska Business Park A. 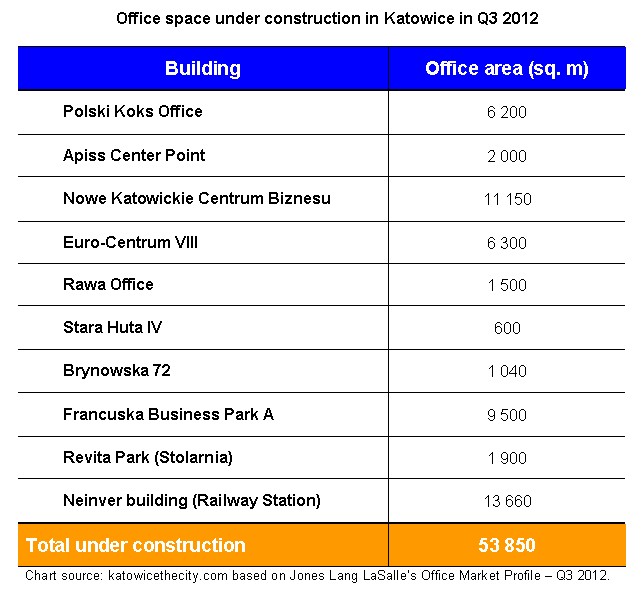