The Euro-Centrum Science and Technology Park Sp. z o.o. and the Polish Agency for Enterprise Development signed an agreement for a financial grant of the extension of the Science and Technology Park’s infrastructure. The project will be partially financed from the European Regional Development Fund by almost PLN 59 million, PLN 10 million will be granted from the state budget. A total cost of the investment is PLN 97 million.

“The Park will implement a part of the national energy saving policy in the area of renewable energy sources through that project” – said Roman Trzaskalik, chairman of the Euro-Centrum Science and Technology Park.

Within the framework of the project, the Park will develop its infrastructure and will create first laboratories to improve renewable energy sources in the Upper Silesia region. The project includes a construction of the new passive building which will comprise 6 335 sq. meters and a revitalization of existing facility covering area of 738 sq. meters.

The passive building will be built in accordance with passive-construction standards and will comprise laboratories equipped with, among others, space process cooling and fiber optic cable installations. It will also house nine-meter-high rooms for testing bulky machinery required mostly by the renewable energy resources companies. Additionally, there will be a data center and office spaces in the building.

The second 738 sq. meters building will feature laboratories of solar systems and collectors to harness the sun’s energy and test it, so called “an artificial sun”. The facility will be also a seat of Training Center of Modern Heating Technology and Solar Systems Test Center to use by producers of heat pumps, solar collectors, ventilation systems and solid fuel boilers.

Moreover, the Euro-Centrum Science and Technology Park will provide research and development projects for the branch companies and will run training courses and advisory services within the project’s duration.

The whole project will be carrying out until 28th of November 2013. The passive building is scheduled to be delivered in 2012. 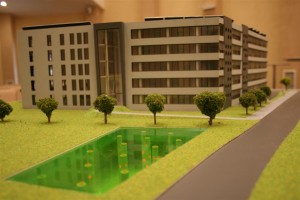 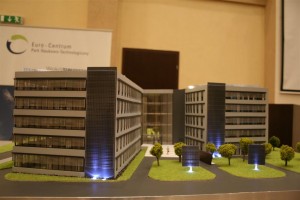