At the beginning of April, Immofinanz Group started the official pre-sales of the third stage of Oak Terraces (“Dębowe Tarasy”) – a residential project realized by its subsidiary Buwog International. A promotional campaign was also launched at the same time.

According to the developer, the successful completion and sale of the estate’s stage I and II combined with the rising demand for upmarket middle class apartments made the Austrian based Immofinanz Group decide to further extend the residential project.

The company has appointed Leach & Lang Property Consultants an exclusive sales agent of the third stage of Oak Terraces.

“In fact the number of clients interested in new apartments in our Dębowe Tarasy complex has significantly increased during the last few months. At present we have already reservations for more than 10% of the planned space and that was even before the start of the official pre-sales stage” – said Daniel Riedl, Member of the Executive Board of Immofinanz Group. “This is very encouraging and we look forward to starting the development soon. After the full takeover of this project – at the end of last year we took over the remaining 30% share from our former joint venture partner TriGranit – we have now clearly defined responsibilities that will facilitate and accelerate decisions and thus the whole development process.”

The estate is situated in close to the City Center and to one of the biggest urban parks in Europe (WPKiW) as well as the multifunctional shopping mall Silesia City Center – the fifth biggest retail complex in Poland. In the third stage of the project the developer will deliver 318 apartments in three buildings: an 11-storey one and two 5-storey ones. Clients can choose from one- to four-room apartments with areas ranging from 27 up to 110 sq. meters.

Just like in two earlier stages of the project the buildings will be equipped with an underground parking garage, storage rooms, lifts and spacious terraces, gardens or balconies. There will be video surveillance monitoring access to the estate that will only be possible by using a remote control or an access card.

The design of Oak Terraces is characterized by the cascade architecture, which provides residents with access to sunlight and view over Katowice. In 2008 the design and the implementation of the estate received awards such as the so-called construction “Oscar” i.e. the Grand Prize of the President of Chamber of Construction in Katowice and the five-star Best Development title in the CNBC European Property Awards competition.

The marketing campaign of the third stage was launched at the beginning of April including press and billboard advertising. Since 1st of May an expert blog will give website visitors the opportunity of acquainting themselves with useful advice concerning the selection and purchase of apartments and their interior design. The blog will be co-edited by specialists from cooperating companies. A profile of the estate will also feature in May on the facebook.com social networking site. 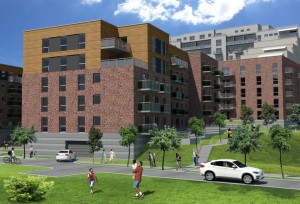 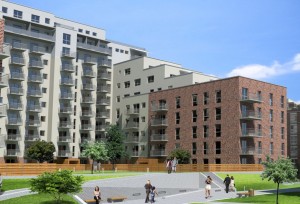