In 2007, 3 Maja Street was classified among top ten streets in Europe with the highest rental growth which picked level of 34,3%. One year later the 38,3% street’s growth was the best result in Poland. The year 2009 had brought a slow down in rentals all around the world, but 3 Maja stayed at its level of EUR 780/sq. m per year while most of top Polish localisations declined in prices. It resulted that 3 Maja is still the fourth expensive retail street in Poland.

At present, the street has a chance to increase its potential and prestige. The City Hall, suggested by the “Stowarzyszenie Moje Miasto” association of local activists, decided about the renovation of 3 Maja St. Within the framework of renewal, tramways will be replaced as well as granite surfaces and small architecture elements are going to be applied. Egis Poland Sp. z o.o. is responsible for the design documentation and concepts. Cost: PLN 1,28 million.

The company prepared four different concepts which will be put to the vote for citizens. Concepts vary on the surface design (two proposals) and the elements of small architecture (two as well: modern or ancient). Each of two surface design concepts can be matched with two proposals of small architecture. The design was consulted with Neinver’s architects as 3 Maja St. borders upon Szewczyka Sq. and the future company’s shopping center. Construction works are closely connected with the Neinver’s redevelopment and the term was not fixed yet.

I concept of surface//ancient design of small architecture (pic 2) 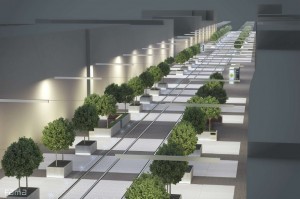 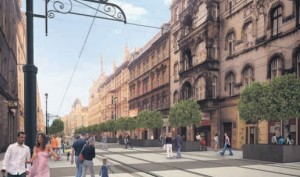 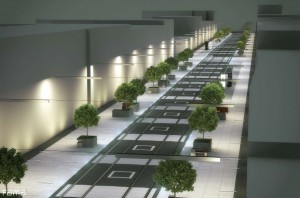 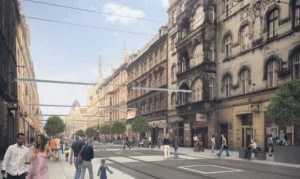