Budimex has finished the construction work on the underground floor of the Silesia Star’s second building. Consequently, the builders reached the ground level of the construction.

Works on the ground storey are now underway. The construction work was started in April this year and is scheduled for completion in August 2016. The net value of the Budimex contract amounts to PLN 61,5 million. As it was in the case of the first building of Silesia Star, the second facility will have eight storeys. The leasable area will be 12 400 sq. meters. In addition, the ground floor will include commercial spaces with the area of 1 100 sq. meters.

The external facade will be made of concrete featuring narrow openable windows of different sizes and a golden colour. According to the developer, the facade materials are subordinated to the simplicity and the nature of the location, referring to the austerity of industrial buildings and the tradition of the Katowice’s modernism. The office complex was designed by APA Kuryłowicz & Associates.

The first stage of the project included the eight-storey office building with an underground garage and a separate commercial and service part. The first company moved into the new offices in January 2015. Deloitte, Mentor Graphics and Getin Bank are among tenants. Silesia Star is located at 10 Uniwersytecka St. 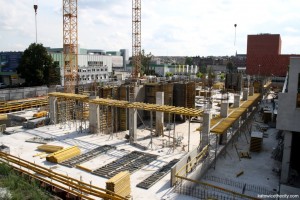 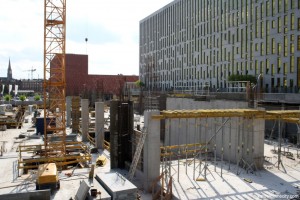