A research department of Colliers International has prepared a report presenting the shopping centers market in the Katowice conurbation. The publication shows data collected after the first half of 2015. 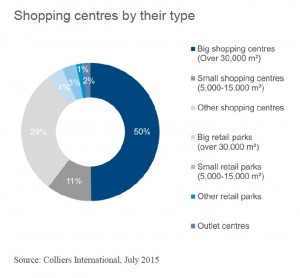 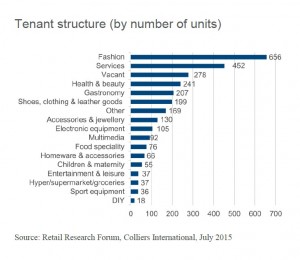 The retail market in the Katowice conurbation has been developing for almost 18 years. The oldest scheme is M1 in Czeladź while Marcredo Center retail park in Piekary Śląskie, that was put into operation in 2014, is the most recent one. In the past years, the region saw a great demand for newly retail space. The first outlet center in the region, Fashion House Sosnowiec that has been subsequently extended several times, was built in 2004. In 2005, the region’s largest (84 000 sq. meters GLA after the expansion in 2011) shopping center, Silesia City Center, was delivered in Katowice. The significant wave of supply came in 2013, when Galeria Katowicka (48 000 sq. meters GLA) and Europa Centralna complex in Gliwice (67 000 sq. meters GLA) were put into operation.

The richest offer of stores, services and gastronomic units is provided by Silesia City Center (over 300) and Galeria Katowicka (over 200). Shopping centers in the Katowice conurbation contain approximately 2 580 stores with the largest tenant group being fashion (25%) and services (18%). Also well-represented are health & beauty at 9% as well as gastronomy at 8%.

Tenants are interested in the largest shopping centers under construction but also in existing ones with a stable market position. Recent transactions include: TK Maxx in Galeria Katowicka (2 000 sq. meters), Fabryka Formy fitness club (1 300 sq. meters) and Multikino (1 200 sq. meters) in Galeria Galena in Jaworzno as well as New Look (500 sq. meters) in Supersam.

The average vacancy rate in the Katowice conurbation stood at 4,2% at the end of H1 2015. However, amount of available space in Upper Silesia vary depending on the city and scheme.

Rental rates for space in shopping centers in Upper Silesia are very diverse. The highest rates in Katowice are in the range of EUR 47-49/sq./month (for 100 sq. meters unit for the fashion tenant).