A one year ago Immoeast AG – today part of Immofinanz Group – officially informed about plans of Silesia City Center (SCC) extension, the biggest shopping center in the region. After five years of activity and high popularity (13,25 million customers last year which spent PLN 1 billion), SCC will grow by 30 percent to cover area of 86 000 sq. meters and increase number of sales units to 310. The extension worth EUR 50 million will make SCC the biggest shopping center in southern Poland. 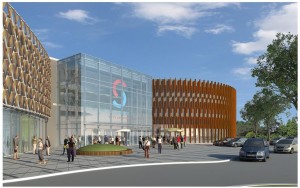 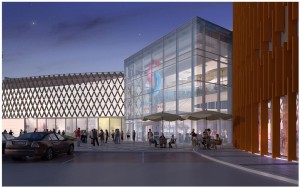 During a today’s press conference, Immofinanz Group presented details of the project. The new extended part of the Center will cover 20 000 sq. meters where approximately 60 following sales unit will be created and about 500 people will be employed. Today, SCC covers 66 000 sq. m. and hosts 250 shops including, among others, Armani Jeans, VJV Versace, Max Mara, Zara and Royal Collection.

According to Walter Wölfler, Head of Development East at Immofinanz Group, the Center’s offer will be much more wider after the extension. “We have already pre-leased more than 60 percent of the retail space. An average area of a one new sale unit will cover 3 000 sq. meters, so as you can see we are targeting to larger tenants and best world’s brands as well. There will be many companies which are going to open its stores in the extended part and they are not present yet in the region or even in Poland. We are sure it will increase a role of Silesia City Center and Katowice as a perfect retail destination. We also assume that our efforts in the extension will cause a grow of the number of our customers by 15% yearly.” – Walter Wölfler said.

Bose International Planning&Architecture is responsible for the design of the new SCC. The same studio prepared an architectural concept of the existing part of the Center. The architects decided to distinguish the new look from the present design. “We wanted to keep abreast of the times, so the project has to make allowance for up-to-date trends of retail infrastructure, architecture and preferences of customers.” – said Marek Tryzybowicz, architect at Bose and author of the concept. Ceramics, glass, aluminium, wood and stone will decorate the new building. According to the architect, the ceramic facade will act like a “screen” of diversified faces depending on day and night lightings. New Silesia City Center will be spread on two floors. Additional parking spaces will be created on the roof and under the central part of the ground car park.

Preparatory works of the investment were already launched this month and are focused on a relocation of gas, rain drainage and power cables utilities. Construction works are planned to be started in September and will be finished in October 2011.

The construction works were parted in stages. During the development alternative parking lots in the area of SCC will be delivered at customers disposal. DIL Polska Baumanagement Sp. z o.o. was appointed as a Project Manager of the investment.

Opening of new Silesia City Center is planned for autumn 2011.