“Spodek”, a sport and exhibition hall, and one of the icons of Katowice will get a new elevation. It is a next stage of refurbishment commenced in 2009. Today, sample elements of the elevation were shown public. A decision, which colour of four presented is going to be applied, will be made in a few weeks.

The “Spodek’s” façade is covered by asbestos and concrete scales placed on wooden bars. According to an expertise carried out by Jan Zamorowski from the Silesian University of Technology, the 40-years’ building structure is overload and the elevation weight needs to be decreased. Every one square meter has to weigh 25 kilos less. “It was one of the main reason for the façade replacement. After the renewal, the one sq. meter of elevation will weigh 4 kilos and will be made of 6 milimeters thin aluminium scales” – said Aleksander Skupin, Architect at “Biuro Projektów Architektonicznych” which is responsible for the renovation’s project.

The elevation of scales covers about 3 500 sq. meters and includes 30 thousand scales of the “Spodek” hall. Nearly 10 thousand were used in the façade of an ice rink.

“A mean life expectancy of the new scales is about 20 years but we negotiate with one of companies ready to prepare it for even 40 years’ life. The scales will be made in Poland but are going to be coloured abroad, probably in Switzerland. We did not decide about the final colour channel yet” – explained Skupin.

Mostostal Warszawa S.A. was chosen last year as the prime contractor of the renovation. “At present we are waiting to obtain a valid building permit. Then, we are going to start demolition works of the elevation and assemble aluminium scales on the structure’s façade replacing the existing ones of asbestos. It is about 70% of contracted works.” – said Alojzy Malczak, Director of Mostostal’s Southern Region unit. “According to the contract, our company will finish the works until June 2011 as “Spodek” has to be prepared for events connected with the Polish presidency in the European Union. Afterwards the last 30% of works will be carried out on the roof and upper ring” – he added.

The contract is worth almost PLN 30 million.

“Spodek” was opened in 1971. The complex includes, aside the main hall, a gym, ice rink, hotel and car parks. It was designed by Maciej Gintowt and Maciej Krasiński and is a world’s great example of engineering. The roof’s construction was a prototype of technology known today as the “Geiger dome”. The building is recognized as one of the first major structures which employed the principle of tensegrity. The structural engineer who conceived the unique tensegrity was Wacław Zalewski. 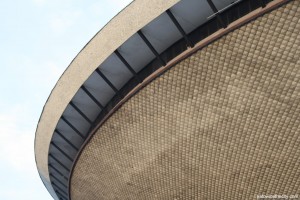 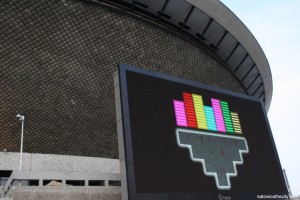