International advisory company JLL presents Q1 summary and the key trends for 2014 on the industrial market in Poland. According to the analysts, the highest gross take-up as well as the largest lease transaction were registered in the Katowice agglomeration.

In Q1 of 2014, the Poland’s gross take-up was in excess of 400 000 sq. meters, which marks the best beginning to a year since 2008. The strongest demand was recorded in Upper Silesia where 126 000 sq. meters of industrial space were leased – in other words the amount stands for 31% of the entire national take-up.

Additionally, the agglomeration had a very good start to the second quarter of this year, as ABC Data – IT hardware distributor – renewed in April its 11 500 sq. meters warehouse and office space lease deal in Distribution Park Sosnowiec.

Currently, Upper Silesia is ranked the second largest Poland’s modern warehouse market with over 1,4 million sq. meters of space. The vacancy rate stood at about 10% at the end of Q1 in Upper Silesia, where 140 000 sq. meters of industrial space was available for rent. Approximately 60 000 sq. meters of new space is under active construction. Effective rents ranged from EUR 2,4 to 3,3 sq. meter/month. 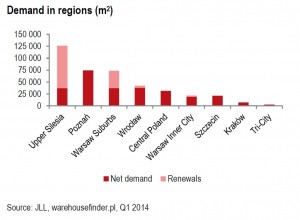 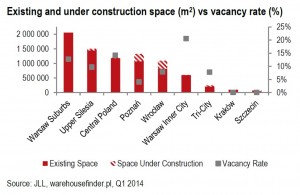