The City Hall of Katowice presented today a final architectural project of the Market Square. The image of the most important place in the City Center was prepared by the Redan studio from Szczecin. 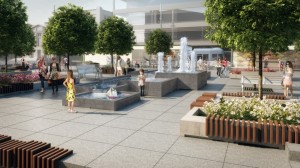 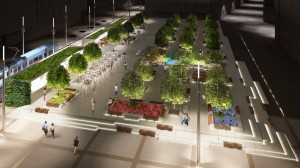 The subjected area is located between the “Zenit” and “Młyńska 1” buildings. The new visualizations also show the new development of the square in front of the Silesian Theater. Previously, the City Hall wanted to choose a designer of the area in a public tender procedure. However, the City’s authorities had canceled the proceedings in February and – as it was found out today – the designing works have been preparing by Redan.

According to the City Hall, the new Market Square was designed with simplicity where benches, flower-beds, trees and fountains will be placed. The heart of the area will be the Flower Square.

Previously, Katowice wanted to spend PLN 40 million for this stage of the City Center redevelopment. Currently, no amounts are released. The works on the Market Sq. will be the third stage of the Market Sq. – Roundabout area’s revamp. The first one phase was commenced last year in March and includes the redevelopment of the tram section between the “Rialto” cinema and the “Jerzego Ziętka” Roundabout. The second stage was kicked-off in late February and embraces road works in the fore-mentioned area. The stage has to be delivered in 18 months.

Realization of the third stage (Market Sq.) is expected to be executed in 2014.