The last months were marked with a number of important events for Echo Investment. This biggest Polish developer sold eight office buildings including flagship Warsaw project Q22. In Katowice, the company launched a construction work of Galeria Libero, delivered the last stage of A4 Business Park and purchased over two hectares of land to execute there a new office scheme.

In the three quarters of the year, the company leased over 50 000 sq. meters of office space, or over 130% more than in a corresponding period of 2015, which proves huge potential of this sector, according to Echo. Apartment sale grew by 47% – the company sold 503 apartments and is fully convinced that its annual goal to sell 825 will be met. In retail real estate area, Echo Investment leased or extended leases for almost 50 000 sq. meters of space.

The most important company’s investment in the sector of shopping centers at the moment is Galeria Libero,which will offer 44 700 sq. meters of GLA. In September, Echo Investment concluded an agreement for the construction of building shell with the Erbud company. The net contract value is PLN 75 million. According to the schedule of works, foundations will be laid by the end of February 2017, then reinforced concrete construction will be erected for six months and finally the building shell will be completed at the end of July 2017. The project is scheduled to be completed in spring 2018.

The marketing strategy of Galeria Libero is based on sports. That is why the shopping center became a sponsor of the women’s football team GKS Katowice.

“The scale of Echo Investment development activity is the biggest in our history. At present, we implement and develop projects of over 460 000 sq. meters of office and retail space as well as investments involving over 2 700 apartments. These numbers make up a half of the company’s achievements recorded in more than 20 years of its existence” – said Nicklas Lindberg, Echo Investment CEO. “Such a dynamic expansion was possible due to our experience gained over all these years as well as good condition of Poland’s real estate market. That’s why we are going to stay focused on Poland.”

In order to maintain fast construction pace, the company is active on the land market. In Q3 2016, Echo Investment signed a final contract for purchasing the right of perpetual usufruct of plots of land with the total area of 23 800 sq. meters on Żelazna/Chorzowska/Grundmanna streets in Katowice, where it plans to develop an office complex with the total of 47 000 sq. meters GLA. At the moment, 38 000 sq. meters of the total space is in preparation to be launched next year.

“Echo Investment strategy assumes fast development of the projects immediately after the site is bought as well as fast capital turnover. The properties we currently negotiate will allow to start construction works within some 12 months after the acquisition. This year, we bought three office and one residential site in Wrocław, Katowice and Poznań. We negotiate purchases in Warsaw, Cracow, Wrocław, Poznań, Łódź and the Tricity area, mainly for residential and office development. We are interested in developing large and multifunctional investments that will become working, living and entertainment space” – said Mikołaj Martynuska, managing director on investments at Echo Investment.

According to GUS, between January and October of 2016, the value of Poland’s construction output fell 15% and this means more severe competition from developers interested in winning decreasing construction orders.

“This year, Echo started 16 new projects, and in 2017 plans to starts additional 17. Thanks to increased competition in the construction market as well as the economies of scale, we are able to get very good auction prices. However, we treat our contractors as partners and we nurture long-term relations with a selected group of companies with stable financial and organizational foundations” – said Nicklas Lindberg.

Considering the upcoming sale of four office buildings to EPP and Q22 to Invesco, the company’s management board made a decision on conditional dividend payment amounting to PLN 350 million or PLN 0,85 per share. The first tranche of the advance dividend will be paid by the end of the year.

“We believe that combing fast capital turnover while efficient usage of all our resources, we will be able to regularly share our excess capital with the shareholders, while maintaining profitable growth strategy and high investment” – CEO of Echo Investment.

The developer is satisfied with just released results for three quarters of 2016. At the end of September, the company’s total assets amounted to over PLN 4 billion, including over PLN 1,6 billion of real estate assets marked for sale. At the end of the period, the company had PLN 322 million in cash. After nine months of the year, Echo Investment posted operational profit of PLN 412 million and recorded net profit of PLN 351 million. 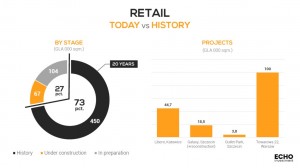 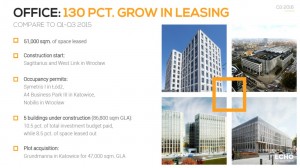