The first stage of the „Franciszkańskie” housing estate was commissioned for use on Wednesday. Only two out of 95 apartments are still available for sale. 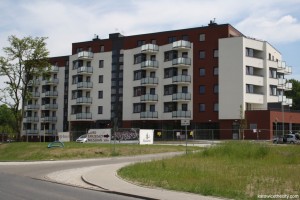 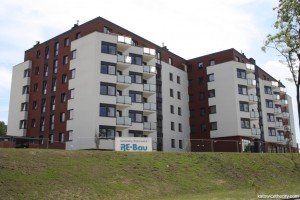 The housing project is being conducted by TDJ Estate on Kijowska St. close to the Franciscan Monastery and Basilica. One two-segment building of six storeys was built within the first stage. Nine commercial premises, 39 parking places in an underground car park as well as two separate garages are also provided for the inhabitants needs. Additionally, Jeronimo Martins built its discount chain store opposite the first building.

The architecture is characterized by white wall plastering and clinker brick elevation, triangular balconies, panoramic lift and small atrium. The apartments area ranges from 27 to 80 sq. meters. Customers of the first stage had to pay from PLN 4 500 to PLN 4 950 per one square meter of the apartments.

„We are satisfied with the fact that the offer is almost sold out before we hand over keys to the inhabitants. The project was prepared very well but it also has to be mentioned that we see a positive trend among our customers concerning the perception of the city and their aspirations – more and more often they consider Katowice as a place where they would like to move to and live” – commented Bartłomiej Stuła, sales director at TDJ Estate.

The tendency seems to be confirmed by figures. „Almost half of the customers who have purchased apartments in the first stage are not citizens of Katowice. They come from other cities of the region or even from different voivodeships, for example from Malopolska and Kraków” – says Monika Wawszczyk, representative of the press office of „Franciszkańskie”.

In total, the company wants to build approximately 1 000 apartments for 2 500 – 3 000 inhabitants within all stages of the housing estate. Construction works on the second stage as well as the apartments sale will be launched this month. Two two-segment buildings (about 190 apartments) will be erected in the stage two.

„Franciszkańskie” was designed by the „Kryjak – Biuro Projektów” architectural studio from Tychy, Poland. RE-Bau from Kraków was responsible for the construction work.