Experts from the National Center for Culture selected Galeria Katowicka’s Higher Level Project („Projekt Wyższy Poziom”) as one of 20 best cultural initiatives in Poland – the assumptions and details of this project will be presented during Polish Projects Exchange. 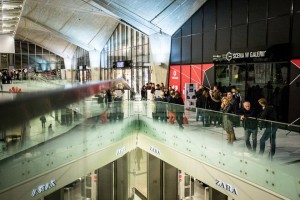 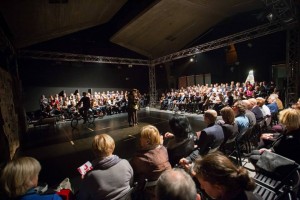 The Higher Level Project was started by Galeria Katowicka in July 2015. Its primary objective is to show local residents how much their region has to offer in terms of culture and education, at the same time encouraging them to take part in as many events as possible.  Also, it is a good example how to give a new lease of life to unoccupied retail premises.

Experts from the National Center for Culture recognized the project for its contribution to redefining the role of culture in public spaces. Galeria Katowicka has been invited to deliver a presentation during „Ogólnopolska Giełda Projektów” (Polish Projects Exchange), which will take place on 8th and 9th of December 2015 in Katowice.

This is an annual event organized by the National Center for Culture and attended by active promoters of culture. Its key goal is to allow sector leaders to share their experience related to cultural projects aimed at communities across Poland, as well as to encourage discussions.

„For the first time in the event’s history, a project carried out by a shopping mall found itself among the best cultural initiatives. Galeria Katowicka’s presence in such a prestigious group of cultural leaders is a big honor to us. We are doing something nobody else has tried before. And we are more than glad to have been noticed and invited by the National Center for Culture. This distinction motivates us to keep working hard and proves that an innovative approach and thinking outside the box are exactly what works best for Galeria Katowicka” – says Dawid Prymas, marketing and public director at Galeria Katowicka.

„When embarking on the Higher Level Project, we knew that we were about to kick off something unique, which would have a social impact rather than turn into yet another action that goes unnoticed. It all started with an idea that we all believed in and quickly began putting it into life. Now I can say that we have already organized over 150 different cultural, art and scientific events in Galeria Katowicka and its surroundings. Probably the most important of them all is the opening of Poland’s only public theater’s stage in a shopping mall, with premieres that can be seen nowhere else” – Dawid Prymas says.

„The first performances at „Scena w Galerii” drew so much interest that there were not enough seats in the room which can accommodate 200 audience members. We had to provide additional chairs. It is worth keeping in mind that this is actually the second biggest stage of the Silesian Theater; only its main building can host more visitors. A special offer we prepared for our customers has proven to be equally popular. The theater tickets people can get for shopping at Galeria Katowicka are disappearing at a rapid rate” – Dawid Prymas adds.