The Upper Silesian Aviation Group (“Górnośląskie Towarzystwo Lotnicze”, GTL) and Konior Studio presented today a concept architectural design of the general aviation terminal to be raised at the Katowice International Airport by the end of 2015. 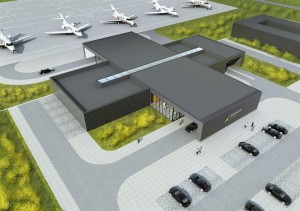 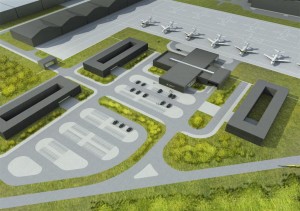 The general aviation includes all civil aviation operations other than scheduled air services and cargo operations. The terminal will serve businessmen, VIPs and any other passengers using business jets and non-scheduled flights.

“The general aviation terminal will enables us to expand our business services and to increase airport’s importance and recognizability as a business destination. We handle about five thousand general aviation operations yearly. GTL sees the potential as the market is growing” – said Artur Tomasik, president of the GTL’s management board.

Apart from the terminal, a new apron for jets, six hangars and a car park are planned within the undertaking. According to Tomasz Konior, head designer and owner of Konior Studio, check-in time is one of the most important factors to be taken into consideration while preparing the project. “The business passengers have to be able to reach a jet in 20 minutes at most since they appeared at the airport. The terminal will be separated from the remaining infrastructure to provide the efficiency of services, to maintain privacy and safety. Quality and functionality of the projected area was decisive during our designing work” – Tomasz Konior commented.

GTL has also commenced to consult interested parties about the idea. “By the end of this year we would like to make a final decision about the shape of the terminal. We speak about the project with jet owners, local authorities, air taxi companies and also we conduct other researches about the general aviation market. We would like to offer our services for customers in the area of southern Poland as well as in the Czech Republic and Slovakia” – Artur Tomasik explained.

The terminal would be erected by the end of 2015. The total estimated cost of the undertaking amounts to approximately PLN 15 million.