Colliers International has released a new report on the industrial market in Poland. According to the analysts, the Katowice agglomeration and surroundings was the market with the largest share in demand in the third quarter of 2015.

In Q3 2015, the projects totaling over 380 000 sq. meters were delivered to the Polish market. As a result, at the end of September 2015, the total stock of modern industrial space exceeded 9,7 million sq. meters. Upper Silesia remains the second largest industrial market in Poland after Warsaw. The total logistics and warehouses space of the region amounts to over 1,6 million.

The highest level of tenant activity was observable in Upper Silesia, which represented 26% of the total demand in the period under analysis. In Q3 2015, tenants leased 177 000 sq. meters of the industrial space located in the region. For example, Moto Profil has rented 33 100 sq. meters (renegotiation deal) in Prologis Park Chorzów. Effective rents ranged between EUR 2 and 3 per one square meter per month.

The largest industrial projects delivered in Upper Silesia during past three months is a built-to-suit building for GE Industrial Solutions in Bielsko-Biała, with the area reaching 45 000 sq. meters. 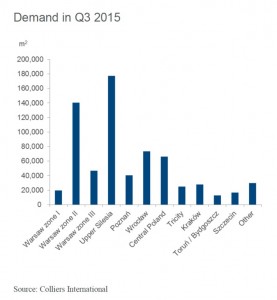 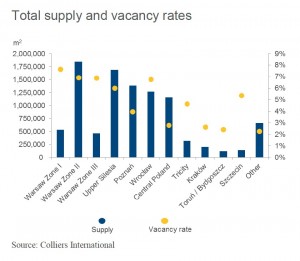