In 2017, the industrial market continued to develop at a high level. The intense activity among developers, who delivered over 2,3 million sq. meters to the market, and among tenants who leased nearly 4,6 million sq. meters, led to another record for both sides. Upper Silesia remained the second largest industrial market in Poland. It was first in terms of developers activity. 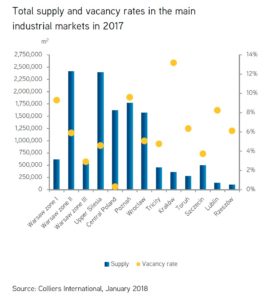 According to the latest report by Colliers International, in 2017, the largest share of industrial space (approximately 460 000 sq. meters) was delivered to the Warsaw market. As a result, at the end of the year, the total supply in the three Warsaw zones amounted to over 3,5 million sq. meters. In second place, both in terms of new supply in 2017 and the size of the market, is Upper Silesia. With 408 000 sq. meters of industrial space, total industrial stock reached over 2,5 million sq. meters at the end of the year.

In terms of demand, Warsaw is the leader among industrial markets – tenants have leased over 1 million sq. meters there – while Central Poland has a similar result. Upper Silesia with almost 940 000 sq. meters leased is in the third place.

­­“In all three regions, companies from the e-commerce sector had a large share in demand. In Central Poland, tenants from this industry even dominated the leasing of warehouse space. Distribution companies were also very active in Mazovia, and production companies in the Katowice region” – said Maciej Chmielewski, Senior Partner at Colliers International, Director of Industrial and Logistics Agency.