Skanska, JLL, Colliers International and the Association of Business Service Leaders (ABSL) together prepared a guide on the most attractive office investment locations in Central and Eastern Europe (CEE).
The report titled Rising Stars 2015 includes Katowice. 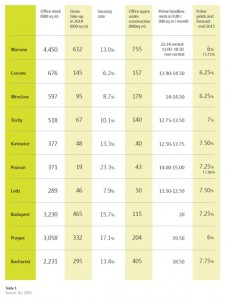 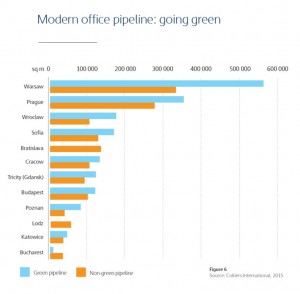 Rising Stars 2015 is an analysis of the region’s potential, broken down by individual locations. These specific locations are the rising stars on the map of office building investments in Europe.

Investors are looking for new opportunities and they have not been this active since 2007, according to Skanska. The developer reports that is getting a rapidly increasing number of queries about potential deals in the region from investors from Europe, the United States, the Middle East and Asia.

The Central and Eastern Europe region benefits from the growing interest of investors in second-choice locations as a way to diversify risk. This is visible in Poland, where regional metropolitan centers such as Kraków, Wrocław, Katowice, Łódź, Poznań and Tricity, are becoming increasingly attractive, the report’s experts say.

In the office sector, regional cities played a significant role, delivering more than EUR 440 million of transactions. This was a record level and higher than the total volumes for the last five years combined in regional cities. „We expect Kraków, Wrocław and Tricity to attract the most capital, with yields compressing across all of them. At the same time, other regional cities (Poznań, Łódź and Katowice), where tenant demand continues to grow, are expected to catch up very quickly with investors trying to benefit from more relaxed yield profiles” – explains Tomasz Puch, Head of Office and Industrial Investment at JLL.

The report describes the investment and office markets of the CEE capitals and the most important regional cities including Katowice. According to the authors, the city has so far been characterized by relatively small investment volumes. With almost EUR 75 million invested in the last ten years, it ranks as sixth amongst Poland’s regional cities. However, Katowice has significant potential to catch up with the leading regional markets, mostly thanks to the quality of recently supplied office developments (such as Silesia Business Park, GPP Business Park and A4 Business Park) and increasing take-up from the BPO/SSC companies, which open Katowice to a wider audience of investors.

Akron, Aviva and Starwood Capital have already noticed the competitive advantages of the city’s market. The analysts expect that other investors will follow their example in the near future. Prime office yields here amount to 7,50%, which offers a premium not only compared with Warsaw, but also with other regional markets.

Katowice is now offering 377 000 sq. meters of modern office space, of which 46% has been added to the market in the last five years. Between 2010 and today, letting activity has mostly come from global shoring and outsourcing services firms. Alongside newcomers to the city, such as, most recently, IBM, Sii and Perform, existing tenants are also looking to expand, demonstrating that demand continues to outstrip availability.

The experts of Colliers International also point out that the number of green buildings to be delivered in Katowice is still very small in comparison to other CEE main office locations. The city is almost at the end of the list overtaking only Bratislava, Bucharest and Łódź. The first position is occupied by Warsaw, while Prague and Wrocław are ranked the second and third respectively.