At the end of Q2 2014, the total modern office stock in Katowice amounted to over 300 000 sq. meters, and is at the same level as in Poznań and Łódź, according to Knight Frank. 226 000 sq. meters of modern supply in Katowice is rentable stock. 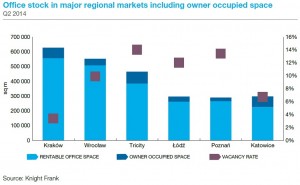 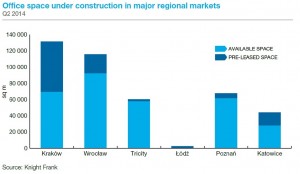 The remaining volume (approximately 75 000 sq. meters) is owner occupied space. The vacancy rate decreased in the second quarter of 2014 and reached the level of 6,7%.

The volume of office space under construction in Katowice is 47 700 sq. meters, can be read in the commercial market report of Knight Frank, summarizing the second quarter of 2014. The amount of supply at the construction stage compared with the existing stock is high in most regional cities. In Katowice, the figure was 16%.

The Stern building (7 800 sq. meters), as the second stage of GPP Business Park, was the only one new delivery in Katowice last quarter, however it was also one of the biggest schemes completed in Q2 2014 in Poland. According to the report, attention should be paid to the significantly higher levels of tenants’ activity in Katowice. The gross take-up, which includes new agreements (including pre-lets), renewals and expansions, amounted to 15 400 sq. meters in Q2 2014 compared to 11 300 sq. meters on average over previous 3 years.

Asking rents in Katowice for modern office space in A-class and B-class office building range between EUR 7 and EUR 16 per one sq. meter/month.