There is a chance for a new mixed-use building to be erected in the heart of Katowice. Meyer Bergman officially speaks about plans regarding a property located east from Galeria Katowicka for the first time since the fund purchased a 100 percent stake in the shopping center. The firm confirms the willing to start the last phase of the investment – an office and retail building. It is called Grand Central.

Meyer Bergman became the majority owner of the mall in 2012, two years after it first joined the development partnership formed by Neinver and PKP. In late November last year, with the purchase of an additional 30 percent stake, it became the sole owner of Galeria Katowicka and its underground part. Opened in September 2013, the shopping center comprises 47 500 sq. meters of commercial space. The office building is the last stage of the multifunctional complex located at Szewczyka Sq. but it has not been kicked-off so far.

At present Meyer Bergman prepares to launch the project. Administration proceedings are being conducted in the City Hall. „We have submitted a building permit application to change an existing planning permit. The extant permit was obtained two years ago for a bespoke building for PKP to be a one single occupier. They subsequently decided not to take the building and so we have reorganized rather than redesigned the building plans to allow it when built to be multi occupational. This has involved designing in a second ‘service core’, where the entrance, stairs, lifts, etc. are located. This allows us to lease office suites as small as 200 sq. meters” – explained Peter Evans, vice president of Meyer Bergman.

As the foundations, services and underground parking were already built at the same time as the shopping center and the main railway station’s building, therefore the construction work on the office facility will last no more than 15 months. „The construction will start when we have secured a certain level of interest in the building” – Peter Evans added.

The building will have a total rentable area of 23 850 sq. meters. There will be 10 storeys in total. 4 550 sq. meters destined for retail units will be located on the lower three floors, while the 19 300 sq. meters office part is planned on the levels from 4th to 10th. 225 car parking spaces will be put at tenants disposal. JLL is responsible for the commercialization of the office spaces, while the local branch of Meyer Bergman will look for retail tenants. 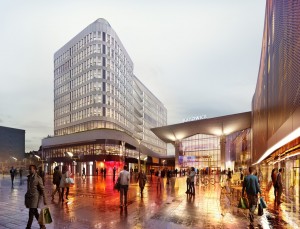 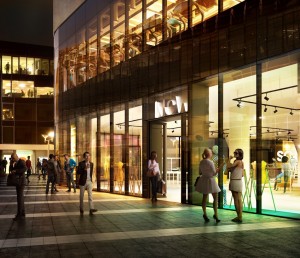