More than 220 retail units were opened over four floors of Galeria Katowicka in the Wednesday morning. 15 500 people have visited the mall in two hours after the opening at 10 a.m. 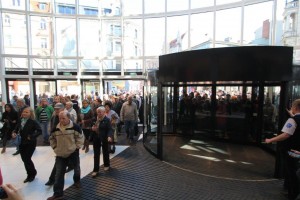 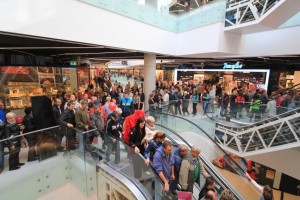 Today, the 48 000 sq. meters shopping center is 92 percent let. The largest tenant of the downtown Katowice-based shopping gallery is Peek&Cloppenburg, occupying three levels with a total area of 3 800 sq. meters. The mall will also feature a lot of other well-known clothing and shoe brands, as well as a supermarket, service points and a wide array of dining options. Another important part is Multikino – the first movie theater developed by this chain in Katowice and one of Poland’s most modern multiplexes will be opened in December.

„Galeria Katowicka has been generating interest from the first scratch. Great location, easy access and catching tenant mix make the mall very attractive. The 92-percent level of letting shows one of the best scores on the country’s retail market. I am convinced that this shopping center will be admitted both by tenants and customers” – said Marek Noetzel, partner in the retail department of Cushman & Wakefield, which is responsible for the commercialization process of Galeria Katowicka.

Galeria Katowicka is part of a retail, transport and office complex developed through collaboration of Neinver Poland, Meyer Bergman and Polish State Railways. In 2007, the national railway operator decided that the station in Katowice and the surrounding area had to be comprehensively renovated in cooperation with a private partner. July 2009 saw the end of a public tender which was won by Neinver Poland. Meyer Bergman joined the project the following year. A cornerstone was laid on 31st of May, 2011. October 2012 marked the completion of the investment’s first stage, i.e. the Railway Station. Public transport buses have been using the underground bus station since February 2013. The total usable space of all buildings making up the complex is roughly 200 000 sq. meters. „Additionally, we have prepared a plot for the construction of 20 000 sq. meters A-class office building” – said Agata Brzezińska, country manager at Neinver Poland. The building works are expected soon to be launched with the delivery date scheduled for 2015.

The cost of the Galeria Katowicka’s development amounts to EUR 170 million. The whole mixed-use complex, including the planned office scheme, will reach the total worth of EUR 240 million.