Dombud will soon conclude concrete works on the new seat of Academy of Fine Arts in Katowice. The building is being erected on the junction of Raciborska and Koszarowa streets.

Ground works on the educational facility was commenced in the middle of March and two months later a cornerstone has been laid at the construction site. At present, the prime contractor is concluding last concrete works on two of three buildings which will compose the facility.

The concrete structure of two buildings (north and west) is almost done and the topping out is expected at the beginning of 2014. Works on the third facility (east side) are less advanced. All three irregular building blocks will form an internal yard. According to the contract between the Academy of Fine Arts and Dombud, all the construction works and outfitting have to be finished by November 2015.

The new scientific, research and cultural complex will cover a usable area of 12 440 sq. meters. The Dombud’s contract worth totals PLN 39,3 million. A total value of the project amounts to approximately PLN 50 million.

The Academy of Fine Arts conducts the project in co-operation with the University of Economics in Katowice. 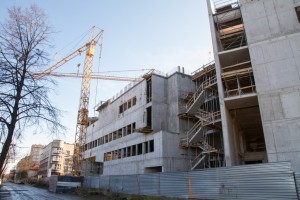 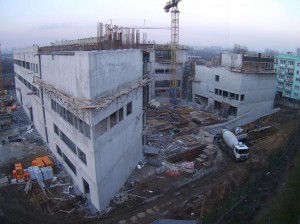