BNP Paribas Real Estate summed up the office market across regional cities in Poland after the first half of 2016. According to the firm, the total volume of modern office space in the city reached the level of 415 000 sq. meters in H1 2016. 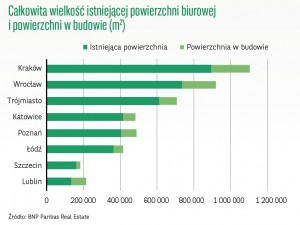 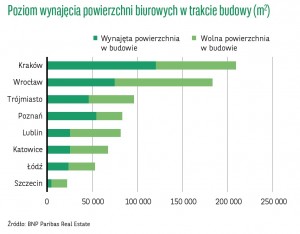 Apart from .KTW I the list of the largest buildings which are being built includes: A4 Business Park III, Silesia Business Park C and Silesia Star II. BNP Paribas Real Estate also listed the last fourth stage of GPP Business Park but according the Upper Silesia Industrial Park, a developer of the office complex, the works have not been kicked-off so far. The firm still looks for tenants of the third building. The fourth stage would be launched, if the commercialization of the third facility is done.

However, it is worth to mention that several agencies publish different data for the same period of time. For example, JLL reported that there were 404 400 sq. meters of modern office space in Katowice and the vacancy rate was 14,3% (-3,1 p.p.) at the end of H1 2016.