Echo Investment has signed a lease with PKP Cargo concerning an area of 8000 sq. meters in an office building which has been constructed as part of the second stage of A4 Business Park. The katowicethecity.com portal informed about this transaction of Wednesday.

It is one of the largest transactions in Poland as regards the regional office property market. The current seats of the company’s plant and its headquarters in Katowice are to be moved to A4BP. The company is to move into the new building in September. The consolidation of Katowice branches of PKP Cargo was carried out with the support of the international consultancy firm Savills.

“Having analysed the status of PKP Cargo’s properties we decided to give up on two separate seats and we focused on one office for our plant and our Katowice headquarters. It is the best solution. Combining seats is a trend which can be observed in large enterprises. It makes it possible to manage office space more effectively and optimise costs” – says Łukasz Hadyś, CFO of PKP Cargo.

“The new seat is a technologically advanced building which fits in well with our needs. The solutions applied will improve the quality of work of the people employed in the Katowice offices of PKP Cargo” – adds Artur Kostowski, director of Real Estate Office at PKP Cargo.

“We are proud of the fact that PKP Cargo chose the second stage of A4 Business Park for its seat. In June this year PKP Cargo will confirm the option concerning 1 500 sq. meters in the same building. Then the second stage of A4 Business Park will be fully leased. All this confirms the top global standards of projects carried out by Echo Investment as well as optimal working conditions offered by us to tenants” – says Joanna Nicińska, senior leasing manager from Echo Investment’s Office and Hotel Department.

“The contract concluded by PKP Cargo and Echo Investment is one of the largest office space leasing transactions in Katowice over the last few years. The company has leased more than 82 percent of the office space available in building B in A4 Business Park. I am glad that we were able to advise PKP Cargo in this complicated and time-consuming process of choosing its new location. I believe that the new seat will work well as the seat of the control centre of PKP Cargo thanks to convenient transport connections and its advanced technical infrastructure. Furthermore, the effective layout of the area on the upper floors made it possible to arrange it flexibly in order to adjust it to the needs of various groups of employees and company’s functions, including the freight train traffic control office in Poland” – says Tomasz Subocz, associate director, head of the Tenant Representation Department at Savills in Poland.

A4 Business Park is being developed at 42 Francuska St. in Katowice, near an exit from the A4 motorway. The office complex will consist of three buildings. The construction of the first one as well as a multi-storey car park offering 560 spaces was finished in Q1 2014. The seven-storey building (9 000 sq. meters) was fully leased by the IBM concern. The second stage of the project, finished in February 2015, had involved the construction of a 10-storey building with an office area of approximately 9 000 sq. meters.

The PKP Cargo group is the leader of railway transport of goods in Poland and the second largest operator in the European Union. It was established in 2001. As far as logistic services are concerned it uses land transport (railway and car) as well as sea transport (ferries). It has the largest fleet of rail freight rolling stock in Poland. The carrier starts the average of a thousand trains every day and it services several thousand customers. It renders independent goods freight in Slovakia, the Czech Republic, Germany, Austria, Belgium, Holland, Hungary and Lithuania. On the 30th of October 2013 PKP Cargo made its debut on the Warsaw Stock Exchange and it became the first rail freight carrier in the European Union to be quoted on a stock exchange. 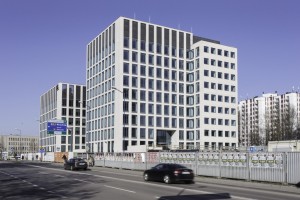 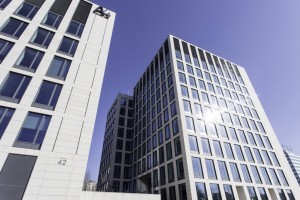