TDJ Estate, a developer of the „Franciszkańskie” housing estate, has delivered the building shell of the project’s first stage. More than half of apartments is already sold.

The construction work on the first stage has been commenced nine months ago. The first building of the estate consists of two segments where 95 apartments and 5 commercial units were designed. The building was topped-out and now wall plastering and installation works are being executed inside. Also, 420 windows were already fitted as well as the building’s elevation is now being covered by thermal insulation coating.

Re-Bau, a prime contractor of the undertaking, needed 485 tons of steel to reinforce the construction, 968 cubic meters of concrete were laid to erect the building foundation. 863 sq. meters of roof covering were used.

The developer has sold 51 apartments and succeeding sale agreements are expected to be signed by the end of this year. Most of the housing units are available within the governmental subsidy programme called „Mieszkanie dla Młodych” (Apartments for the Youth). The sale is also based on a closed housing escrow account. The account enables the buyers to pay only 10 percent of the apartments’ total worth when they sign the purchase agreement, while the remaining amount will be paid when the construction work is finished. 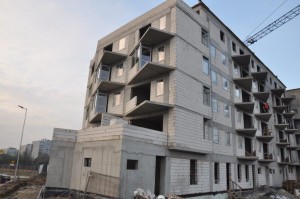 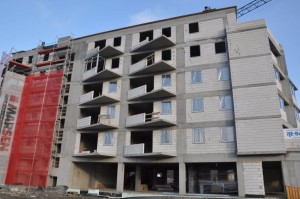