Sport Investment Group (SIG) has revealed more details about its housing project being built on Złota St. A dedicated web page of the scheme was launched and the housing estate got its official name – Baildomb. 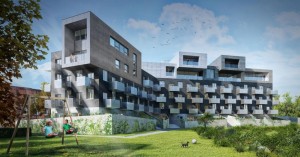 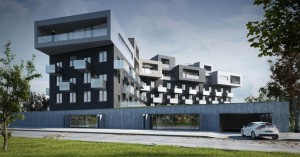 Construction works on the apartment building were launched in September last year. Ground works have been finished and the laying of foundation is underway at present. The scheme is being erected according to the architectural project of Robert Konieczny’s KWK Promes.

SIG, a developer of the undertaking, has released the official web page of Baildomb (baildomb.pl). Customers can find there general information about the building, architect and location. A 3D search of apartments was also provided enabling to find and see layouts of all 69 housing units. The building was divided into three main areas – the ground floor where apartments with gardens were designed, floors from 1 to 3 (apartments with balconies) and the fourth floor destined for so called villas. Buyers can choose from small flats (29 sq. meters), apartments with one, two, three or even five balconies and spacious, two-storey villas (up to 142 sq. meters).

SIG did not disclose prices for each of the apartments at the web page, however example prices were described at one of classified ads portals. Future inhabitants will have to pay PLN 5 900 per one square meter for 74 sq. meters apartment located at the third floor, while one of the villas costs over PLN 1,11 million (PLN 8 900 per one square meter). 12 apartments including one villa were already sold.

The construction work on Baildomb is expected to be finished in the first quarter of 2017.