“Spodek”, a multipurpose cultural, sport and exhibition hall will get a full refurbishment of its elevation. After a renovation of the “Spodek” interiors finished in 2009, at present the arena is preparing for changing its external appearance. MOSiR (Municipal Sport and Recreation Center) announced last days a tender for architectural, construction, engineering and inspection services. Interested companies can file motions until 28th of July 2010.

The works will include, among others, site preparation, removal of asbestos, design of new elevation, installation of illumination and alarm systems, electrical installations, information systems and servers, roof works. A 200 meters long and 1,5 meter high electronic bulletin board will be installed on the building’s lower level.

The renovation will embrace both the “Spodek” arena and an ice rink building. A chosen prime contractor will have 31 months to conclude the construction works.

As many cultural events is planned for following months (concerts of Korn, Leonard Cohen, Deep Purple, Rawa Blues Festival, Mayday), the complex will be available for visitors during the renovation.

About
“Spodek” was opened in 1971. The complex includes, aside the main hall, a gym, an ice rink, a hotel and car parks. A total capacity of the arena increased to 11 028 seats after the last year’s renovation. “Spodek” was designed by Maciej Gintowt and Maciej Krasiński and is a world’s great example of engineering. The roof’s construction was a prototype of a technology known today as the “Geiger dome”. The building is known as one of the first major structures which employed the principle of tensegrity. The roof uses an inclined surface held in check by a system of cables holding up its circumference. The structural engineer who conceived the unique tensegrity was Wacław Zalewski. 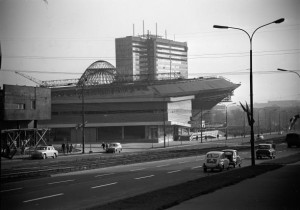 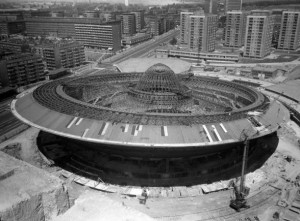